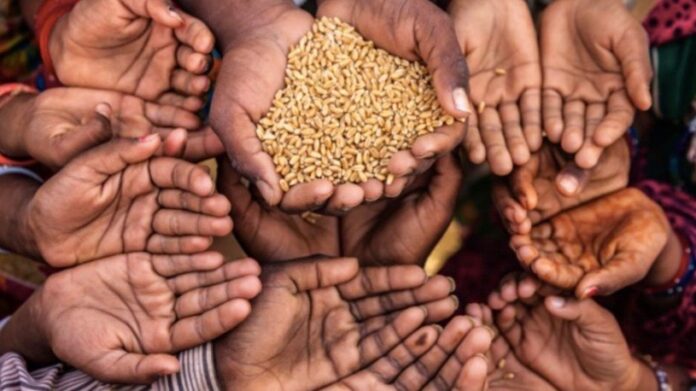 Food is the basic necessity for all living things. It is decisive in keeping the wheel of survival going. There are two main types of food. One is vegetarian and the other omnivore. As history revealed, man evolved and  adopted new ways of agriculture and breeding animals. But the industrial revolution made big changes for improving the techniques of food production. In recent times global warming has grown to an alarming level.

In the stone age people would tend to use tools for arranging meal. Some people used iron and made swords and spears out of it with which they hunted  animals for their meal .Some people in the community grew crops and were known as farmers. The world population was negligible at that time when compared to the present. They used to live in tribes and exchange their eatables to survive.This was known as the Barter system. Hunters provided meat to farmers and got wheat or rice in return. With passage of time humans  made new tools. Using these tools, the production of food became very easy. Men got new ideas for increasing food production and invented machines like tractors and thrashers. These machines brought revolution.That revolution is known as industrial revolution. Due to machines, a huge amount of food production started. We can say the industrial revolution saved a lot of people from starvation, despite introducing capitalist thought. Now the population is increasing at an extremely high rate and the meal availability problem is raising its head.

Population a threat to food security

Global population growth means that meal production needs to increase by 70% by 2050, placing pressure on meal quality standards. The Food and Agricultural Organization of the United Nations (FAO) forecasts that global food production will need to be enhanced  by 70% if the population reaches 9.1bn by 2050. We can clearly analyse the situation from the threats given by thes international institutions.

Due to excessive release of carbon dioxide from the energy production factories and transport smoke the temperature is increasing on our planet. This carbon dioxide does not allow the heat to pass back in space after reflection from earth. This accumulation of heat is causing global warming. Due to global warming the weather pattern is changing. Over raining in some places is responsible for flooding. This flood is destroying the habitats of the animals and ruining the crops. This destruction is causing shortages of meal in most of the countries. And their economies are so weak that they can’t even import and people are striving to death.

Restrictions of the world due to some reasons

World has become a global village. The Actions of one country affects the health of the other. Invasion of Russian troops on Ukrainian land alerted the world power. They Declared it an illegal occupation and implemented some restrictions about trade. Most of the countries cannot buy anything from Russia. On the other hand Russia is the largest supplier of meal, especially wheat to the world. It created a meal crisis in the world. We need to quickly fix this problem to save the world from the greatest famine in history.